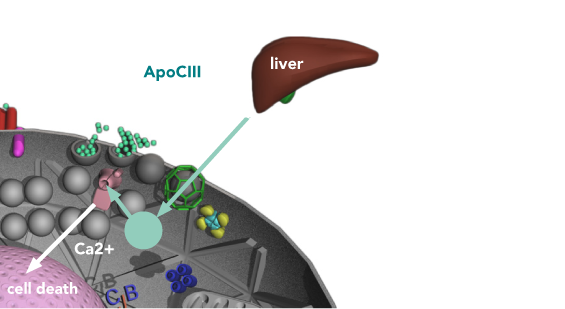 ApoCIII is produced by liver and reaches beta-cells via blood. On contact with beta-cells, apoCIII activates calcium channels (pink barrels) to allow more calcium ions flow into the cells. Too high amount of calcium ions have a toxic effect and lead to gradual cell death.

Apolipoprotein CIII (apoCIII) is a protein produced primarily in the liver. ApoCIII plays a key role in lipid metabolism. It has also been found to be a pro-inflammatory factor thereby increasing the risk for cardiovascular diseases.

Calcium is very important for a normal function of insulin-secreting beta-cells. Serum from type 1 diabetes patients has been found to increase the activity of calcium channels in beta cells, resulting in increased concentration of calcium and beta-cell death. The factor in serum responsible for this effect has been identified to be apoCIII.

Insulin decreases the production of apoCIII. In patients with type 1 diabetes the insulin-producing beta-cells are destroyed and this results in increased apoCIII. It has also been shown that insulin resistance where the sensitivity for the hormone is reduced, seen in many patients with obesity and type 2 diabetes, impairs the regulation of apoCIII and leads to increased levels of the protein.

People with decreased levels of apoCIII are healthier and live longer

There are people who, due to a change in the apoCIII gene, have a lifelong reduction of apoCIII and they have a favorable pattern of lipids, increased insulin sensitivity, lower incidence of hypertension, cardiovascular diseases and they live longer.

Reducing apoCIII  is a therapeutic target in the treatment of diabetes

BB-rats develop a human-like type 1 diabetes. When apoCIII production in these animals was lowered by antisense treatment, the onset of diabetes was significantly delayed. Researchers at Biocrine are now in progress with the development of a specific monoclonal antibody against apoCIII.  Monoclonal antibodies are already in use for treatment of other diseases like rheumatoid arthritis and multiple sclerosis and give a more controlled effect compared to antisense. The utmost aim is to develop tools to safely reduce apoCIII in individuals at risk for diabetes.