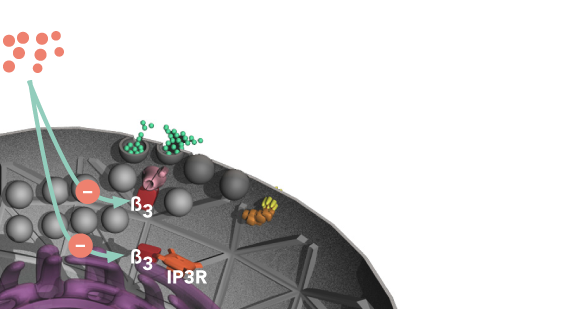 As glucose is taken up by beta-cells, a chain of molecular events leads to activation of calcium channels (pink barrels) allowing more calcium ions to flow into the cell. This in turn stimulates insulin release (green circles) to the blood. In diabetic patients, β3-subunit (red block) of calcium channel restrains insulin secretion. To reverse this action, β3-subunit could be blocked by a specifically designed substance (pink circles)

An ion channel is a complex of proteins embedded in the cell plasma membrane. Each channel allows only specific ions to flow through, so potassium ions (K+) are transported through the potassium channel and calcium ions (Ca2+) through the calcium channel. The latter is built up of four subunits: the main open-barrel shaped α1 that allows the ions flow through, and three assisting subunits – α2δ, β and γ. Calcium channel activity drives unique functions in different cell types, such as muscle contraction by muscle cells and insulin secretion in pancreatic beta-cells.

When levels of blood sugar, or glucose, rise, it is efficiently taken up by beta-cells. Within the cells, glucose initiates a chain of molecular events that lead to calcium channels allowing more Ca2+ to flow into the beta-cells. Calcium ions  stimulate insulin release to the blood. Thus the higher the blood sugar concentration, the more insulin is released by beta-cells; an effect mediated by Ca2+.

There are several types of calcium channel β-subunits. One of them, β3, has an unexpected function: it restrains insulin secretion to the blood. By selectively blocking the β3-subunit in beta-cells of diabetic patients, one could increase insulin secretion promoted by high levels of glucose, and prolong beta-cell survival.