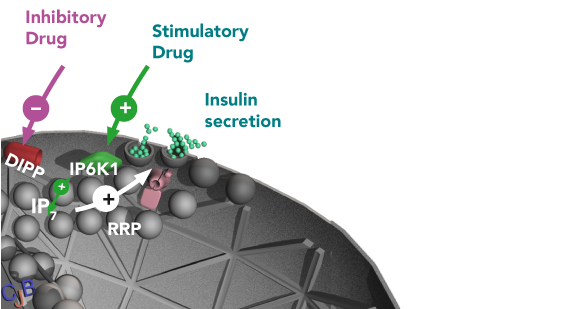 High amounts of IP7 are necessary for efficient insulin release (green cicles) by beta-cells. IP7 stimulates ready releasable pool (RRP) of insulin to be secreted to the blood. IP6K1 builds IP7 from IP6, while DIPP reverses this action. To increase amounts of IP7 in diabetic patients, DIPP can be blocked or IP6K1 could be stimulated with a specifically designed inhibitory or stimulatory drug respectively.

Inositides take an active part in regulating many vital processes in all cells in the organism. Depending on its primary function, every cell has a specific footprint of what inositides it contains.

One of the inositides is an inositol pyrophosphate with a common name IP7. It is an active molecule and as soon as it is formed with assistance of the IP6K1 enzyme, it is degraded back to the more stable IP6 under the control of DIPP enzyme. In insulin producing beta-cells  the amount of IP7 is unusually high compared to other cells in mammals. IP7 in beta-cells controls insulin release.

For efficient glucose metabolism insulin is released in two phases

As levels of blood glucose rise, it is taken up by beta-cells. This initiates a series of molecular events leading to insulin being released into the blood. Insulin is released in two phases, an initial and a second phase. This enables a more efficient regulation of blood glucose levels.

We have shown that IP7 increases the size of the pool of insulin granules that are available for the first phase of secretion. This is known as the readily-releasable pool. Therefore maintaining a high level of IP7 in beta cells is vital for an initial quick and efficient insulin release and the proper control of blood glucose concentration.