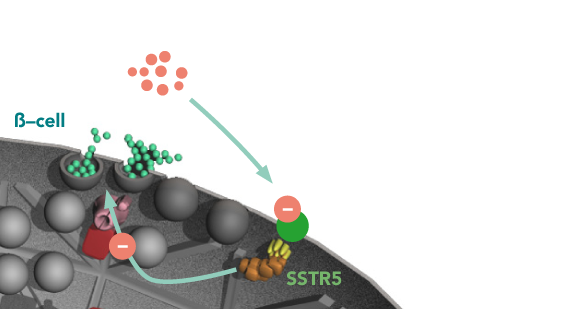 After somatostatin binds to its receptor (SSTR5 complex), a chain of molecular events leads to decrease in insulin secretion (green circles) to the blood. In order to increase insulin release, somatostatin receptor can be blocked with a specifically designed substance (pink circles).

Somatostatin is a hormone produced by delta cells in the pancreatic islets of Langerhans. This hormone has various functions in an organism, among others effective regulation of beta- and alpha-cells, secreting insulin and glucagon, respectively.

In pharmacological terms, antagonists are drugs which block a receptor from executing its function. When somatostatin binds to its receptor on beta-cells, there is a decrease in insulin production. An antagonist to somatostatin receptor will stimulate insulin release at high glucose levels.

Targeting receptors on both beta and alfa cells